Acting as a discovery trail of alluring elements dotted through Globe and Railway Lanes, and as way-finding cues and seating elements.

The concept for Globe Lane draws inspiration from the gold rush which helped shape Perth. His sculptural jewel-like forms elude to the rich minerals that lie beneath the city and to the gems waiting to be discovered within 140. 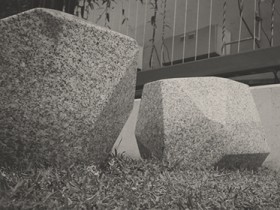